The NLCS Drama Department aims to stimulate lasting pupil curiosity, interest and enjoyment in drama and dramatic literature from a variety of cultures and traditions. Girls develop a range of personal qualities, including perseverance, initiative, confidence, individual awareness and group sensitivity.

The girls develop their acting skills and enjoy a range of performance opportunities. We wish to provide girls with the opportunity to aspire to professional standards, within a professional environment. We aim to offer a diverse and original programme of activities which allows girls to develop confidence and a sense of pride at excelling at the highest level in all areas of performance work.

From Years 7-9 students follow a carefully designed course which ensures progression in the key components of preparation, performance and evaluation. Girls are introduced to a number of published texts and ideas of theatre practitioners.

The GCSE course gives girls the opportunity to develop practically as performers and/or designers. They investigate practitioners and genres, working collaboratively to develop ideas to communicate meaning to an audience. They experiment with dramatic conventions, forms and techniques to produce and realise original theatre pieces. They also have the opportunity to participate in performances of extracts from play texts. They develop their knowledge and understanding of drama, including their ability to interpret texts for performance. They attend live theatre regularly and review performances.

In the Sixth Form, students have the opportunity to develop their performance skills both in devised work and scripted performances in the light of more detailed exploration of the ideas of practitioners and theatrical styles. They study a number of key texts and will develop their own directorial approaches. They continue to attend live theatre regularly and review performances.

Each year we offer a programme of more than 35 shows and productions allowing our students to develop their many talents, performance skills and confidence to assist them on their pathway to becoming assured, well-rounded young adults. 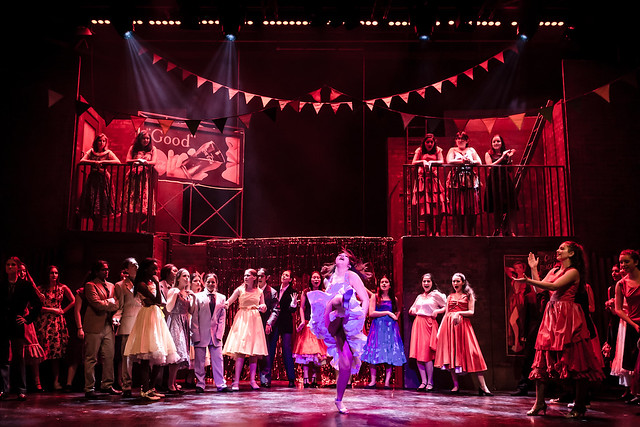 The programme is reviewed every year to meet the demands and strengths of the students. Regular productions include a Years 7 & 8 production; a Years 8 & 9 production; a Senior School (Year 10-13) play or musical; a Senior School physical theatre piece; Year 10 plays; a Year 11 play; a Year 12 pantomime and a Year 12 student-directed play. Other recent events have included a Year 9 Improvisation Evening, Glimmers (an evening of dramatic extracts; directing workshops; playwriting workshops and performances.

The department is renowned for its range of exciting and innovative productions. Recent Middle School (Years 7-9) productions have included The Trojan Women, Emil & The Detectives and The Caucasian Chalk Circle. The musical Juniper Dreams was written for the girls by members of the Drama and Music departments.

Senior School (Years 10-13) productions have included The Revengers’ Comedies, Macbeth, West Side Story and Sister Act. We were amongst the first granted permission to perform Morgan Lloyd Malcolm’s Emilia after it enjoyed a successful run in London’s West End. Featuring authentic period costumes provided by the Royal Shakespeare Company, this production was a resounding success.

We are lucky to be able to utilise the wonderful Performing Arts Centre. This is a wonderful proscenium arch auditorium with an orchestra pit. However, when staging Earthquakes in London we completely transformed the auditorium. Building a new false floor, when entering the auditorium audiences were greeted by high metal chairs crowded around an S-shaped catwalk set in traverse that was flanked by two spaces at either end that was frequently and rapidly changed to represent a range of rooms including an NHS ultrasound consulting room, the inside of an aeroplane and a room with a hallucinatory bed that was lit up and moved up and down. Bursts of music and images projected onto the screens helped create atmosphere and establish period. A rain curtain had been built and when the earthquake finally hit London, the whole auditorium vibrated. We constantly challenge ourselves to give students innovative and exciting performance experiences as actors, designers, technicians and directors. 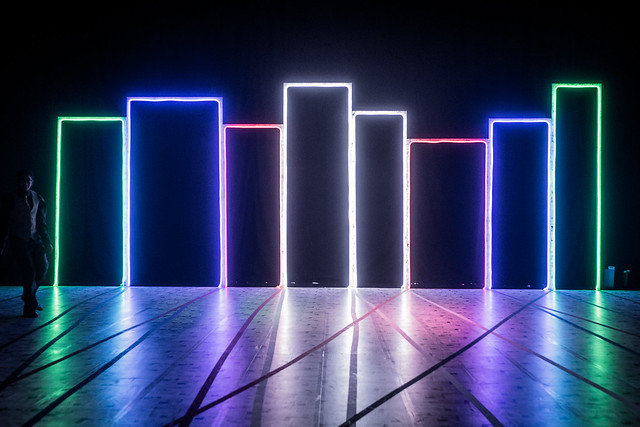 We also have a weekly Drama Club for Year 7 girls and there are many regular trips to see professional theatre productions.

Sixth Form students also have the opportunity to attend the Edinburgh Fringe Festival performing both published and original material. One of the most exciting and challenging parts of performing at Edinburgh is the daily promotion of the show along the Royal Mile to potential audience members. The NLCS students developed a great reputation for their innovative methods and performed to large audiences every day. Our productions have been met with great critical acclaim all receiving 4*s from professional reviewers. Our production Skye was described as “beautiful and executed flawlessly", another of our productions was described as "an imaginative and fantastically directed production".