About NLCS
History of the School
A tribute to Joan Clanchy

‘If education is to mean more than a collection of certificates, service must still be our ideal’.

Our memorial ceremony for Joan Clanchy will take place on Saturday 11 September at Canons. Tea will be served from 3pm and the service will start at 3.30pm. For those who would like to stay on, there will be more tea and cakes on offer following the service and we expect the event to be finished by 6pm. If you would like to attend the memorial, please click here to RSVP.

We hope to be able to record the event for circulation to those unable to attend.

When, in January 1986, Joan Clanchy arrived to take up her post as the seventh Headmistress of North London Collegiate, she was already a trailblazer in the long and distinguished history of the School – the first Headmistress to have a husband and children. She had made the long journey south to Canons from Edinburgh where she had been in charge of St George’s School for Girls for eleven happy and successful years. She instantly noticed the many differences between the two establishments, but revelled in the challenges which running a large, culturally diverse and academically ambitious school on the outskirts of London would inevitably bring. Over the course of the next twelve years, she would, in the very best tradition of NLCS, respect the past but never hesitate to introduce improvements, changes and innovations so that the School could move with the times and continue to offer what she passionately believed to be the finest possible education.

Mrs Clanchy certainly hit the ground running at the start of her first term in office and it is no surprise that one colleague who witnessed her in action admiringly described her as ‘absolutely dynamic.’ Within weeks of her arrival, she had altered the timings of the School day to create an extra break and had introduced a new canteen system at lunch time to provide healthier food and better value for money. More significant changes were to follow as she saw how best to expand the School and create an exciting and seamless education for pupils from the age of four to eighteen; entry into the Senior School was expanded from three to four streams, a brand-new, bespoke building for the Junior School was opened within a year of her arrival, the First School became a reality in 1995 and the elegant rooms in the Old House at the very heart of the School were set aside as a centre for the Sixth Form to use for learning and relaxation. New buildings and initiatives to provide state of the art facilities appeared in quick succession – a Craft, Design and Technology Centre, all-weather tennis courts and lacrosse practice areas, refurbished science laboratories, an indoor swimming pool and extensive plans for a Sports Hall. Mrs Clanchy recognised that all these projects came at a considerable financial cost; she was never one to spend money lightly – especially in times of economic hardship - but she was tireless in her efforts to raise funds for what she instinctively and cannily saw were key elements in a modern school.

Bricks and mortar, however, were not, of course, her only or, indeed, her main concern. She was a brilliant and incisive manager who looked to identify and nurture the very best qualities in every member of the School community. To that end, she established the staff appraisal system so that colleagues could reflect on and develop their roles and careers as teachers; she set up a Senior Management Team to help her with the smooth running of a large and complex institution and she introduced the annual school development programme to share with others her vision of the direction in which she planned to take North London. She felt that the long-established prefect system was out-dated and, with courage and tenacity in the face of considerable opposition from the student body, ensured that every girl in the Sixth Form had one or more key areas of responsibility under a small Senior Student Committee. This was a bold departure from tradition, but it worked even better than she had originally envisaged and, from that time, generations of Sixth Form students have relished this chance to run societies and events for themselves, to test and develop their abilities and to flourish as individuals.

Mrs Clanchy knew, however, that a successful school is far more than buildings, facilities and systems, however impressive they might be. Her very real desire to offer the students in her care a bold and ambitious education - in the broadest sense of the word – lay at the heart of everything that she did. She was clear from the start that a North London education would never revolve simply around impressive examination grades; to that end, she made sure that, apart from awards made as students left the Sixth Form, no prizes or even subject grades were given out so that the girls did not unhelpfully compare themselves to each other. Mrs Clanchy accepted with good grace - if not enthusiasm - the inevitable academic changes imposed upon the School, including the introduction of GCSE examinations in 1998 and the hotly debated results league tables in 1992.  She was, however, immensely proud that her North London students could rise to any challenge and that the School regularly appeared at the top, or very near the top, of any ranking based on public examinations. In 1994, when the Financial Times produced a table which crowned North London as the best-performing girls’ school, the accompanying report contained the following observation; ‘Ironically, Clanchy disapproves of the league tables which have showed her school to perform prodigiously.’  Just a year before this, Mrs Clanchy had made no secret of the fact that she felt so strongly about the new English National Curriculum that, in April 1993, she tendered her resignation from the National Curriculum Council in a succinct and pithy letter which demonstrated beyond any doubt that she would not be prepared to compromise her own academic principles. Meanwhile, the educational provision at North London grew and developed under her care; art, music and drama flourished, precious links with overseas schools were nurtured and a regular Thursday slot was set aside for the weekly Senior Societies programme to encourage students (and teachers) to explore subjects and ideas far beyond the syllabus, to listen to and quiz eminent speakers and to engage in lively debate – the ‘jewel in her crown’ as one Year 12 student aptly described this initiative.

Tall, strikingly handsome and immaculately dressed, Mrs Clanchy was, in so many ways, an imposing figure to whom success seemed to come very naturally. She had been a senior scholar at St Hilda’s where she read History, had enjoyed a glittering career as a charismatic and popular teacher before taking on her first Headship at an exceptionally young age and could easily dominate any meeting or argument with her wit, charm and sheer force of character. Yet this larger-than-life personality was tempered by immense kindness and empathy towards others, an ability to know and value each and every member of the entire school community, a delightfully self-effacing streak and an impish sense of fun – who else would have called her cats ‘Frances Mary Puss’ and ‘Sophie’ after the first two North London Headmistresses? Although she liked to describe her own brand of leadership as ‘the last of the Catherine the Great style of management’, she forged excellent relationships with those around her, would always find time in her hectic schedule to talk to both staff and students and was proud of the fact that she knew every girl in her care by name. Opening up opportunities for her students was one of her great passions; it was not enough, she often said that women were offered equal opportunities in the world of work – they needed to be offered equal successes. She genuinely loved her contact with the girls, taking delight and pleasure in teaching History to classes each week, she regularly gave sparkling assemblies which made her audience laugh and, even more importantly, think and she was an irresistibly witty, provocative and eloquent public speaker. In short, she cared deeply about people and wanted what was the very best for each and every individual; in response, they knew that she cared and they respected and loved her for that very reason.

For all her professional successes – and there were, indeed, many of them – family was central to Joan and it was what gave her life both meaning and structure. She had married Michael Clanchy, a distinguished historian, soon after they both left Oxford and she was immensely proud of all that he and their two children, Kate and James, had achieved. It was no surprise to anyone that her final assembly to the School at the end of the summer term in 1997 took the form of a letter to her beloved eight-month-old grandson in which she explained to him that she had worked ‘for twelve years in a really lovely school’ with its ‘tradition of having outgoing, talkative, bouncy girls.’ Thus, in characteristically self-deprecating style, Mrs Clanchy tried to pass off her own extraordinary contribution to the life of North London, but no one has ever underestimated what she achieved in her twelve momentous years at Canons and the enormous debt of gratitude which is owed to her. 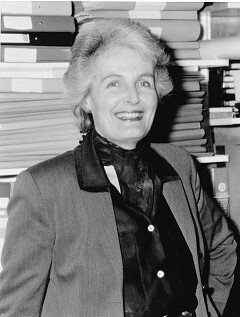